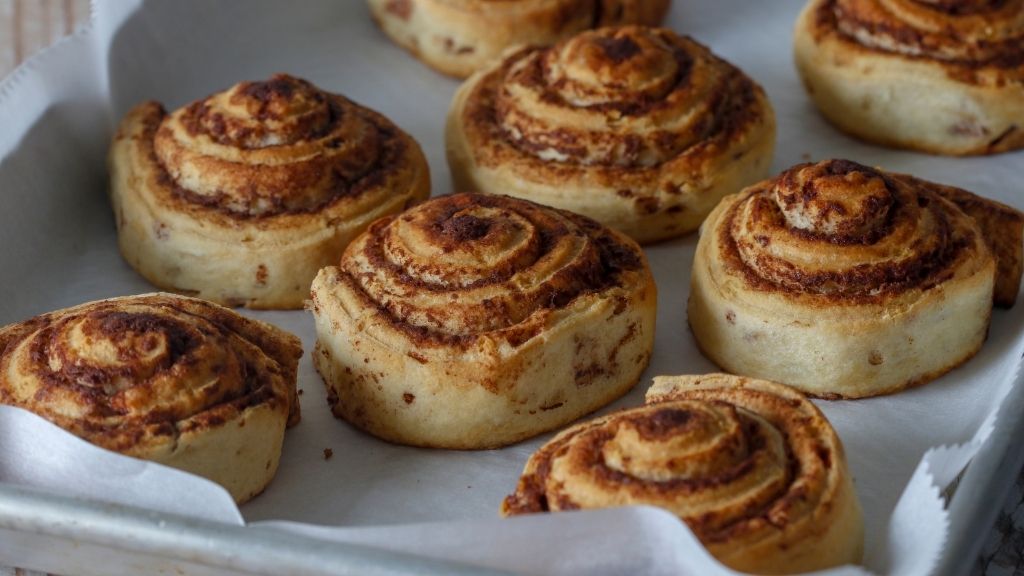 Whether you’re an experienced or a new baker, cinnamon rolls must be on your baking list. That’s how popular it is. But burning the bottom of it is a common issue faced by even pro bakers.

How to not burn the bottom of cinnamon rolls?

To avoid burning the bottom of the cinnamon roll try using parchment paper. It’ll work as a medium between the rolls and the pan to prevent heat. Try positioning the pan on the lower shelves of the oven. Using a baking stone is another effective way. Also always preheat the oven before baking.

That was only a summary of the whole thing. To know more details, keep reading till the end.

How To Tell Your Cinnamon Roll Is Done Cooking?

One of the common mistakes people make while baking is to overcook the item. But nobody likes sweet things overcooked. Rather than tasting sweet, it leaves a bitter taste in the mouth.

Now, this may be forgiving in the case of cookies but not for cinnamon rolls. If you overcook it you won’t get the fluffy texture of it. So it’s essential to know when it’s done cooking.

So how to tell if your cinnamon roll is done cooking? Look out for the color of the rolls. It should have a golden brown color. Any shade darker would mean you’re overcooking it.

To be more sure, take a toothpick and insert it inside the roll. Do it from the middle side of the roll then pull it out. If you see any raw dough sticking to it, it’s still undercooked.

If there’s nothing sticking to the toothpick then it’s perfectly cooked now. You can try lifting a cinnamon roll and see the bottom. The color should be a lighter shade of golden brown.

Take out the cinnamon roll once you’ve confirmed that it’s perfectly cooked.

How To Avoid Burning the Bottom of Cinnamon Rolls?

Burning the bottom of a cinnamon roll is quite a common baking mistake. Even if you’re doing things right, it might turn out overcooked. So you may find yourself wondering what’s going wrong?

Maybe the problem is within the oven. Test the oven before baking to make sure everything is fine. However, even if the oven is fine, your cinnamon rolls might still burn.

Because when you’re putting it in the oven, the sugar melts and starts to burn. The melted sugar spreads and hardens the cakey part. So, it should be cooked with a little more caution than baking cakes or cookies.

Now, if you already know the recipe then fixing this mistake is easier. You’ll only need to follow a few tips. Let’s go through them one by one-

Many of us make the mistake of not using parchment paper while baking. However,  it’s okay to not use one with a non-stick pan. But it’s best that you use it for a recipe like cinnamon rolls.

Because the sugar inside the wraps melts and gets stuck with the pan. And when that happens the cinnamon roll gets burned in the bottom. Our goal is to prevent that.

So take a piece of parchment paper. Cut it in the size of the pan and position it properly. Looking for some good parchment paper? We have recommendations for you.

This is a great baking oven-safe parchment paper that we use: 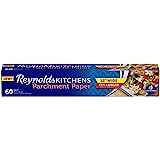 If you don’t have parchment paper at home, you can use regular papers too. In that case, apply some oil or butter to the paper beforehand. Otherwise, the dough might stick with the paper.

Some even use a medium between the parchment paper and the pan. You can lay some flour or cornstarch before placing the paper. It’ll work as a layer to prevent direct heat.

This may help you prevent burning cinnamon rolls from the bottom. By the way, flour and cornstarch are useful in thickening a puree.

Try to place the pan on a lower shelf. It’s one of the tricks to make sure the rolls are baking evenly. Maybe put it in the lower 3rd of the oven shelf. If you have 3 shelves then put the tray in the middle.

You can try using foil paper around the pan as well. It’ll prevent the hardening of the roll’s side areas. Also, remove the baked rolls from the pan as soon as you bring them out.

Keeping the rolls in the hot pan burns the bottom side. If you wanna avoid burning them make sure to place them on a cool plate. Apply the frosting after the rolls have cooled down.

Another mistake people make is not preheating the oven. Many of us just set the temperature while placing the rolls into the oven. If you do that, it’ll take more time to bake the rolls.

You wouldn’t wanna take the risk of making these rolls hard. So preheat the oven first. Set the temperature at 375 degrees Fahrenheit or 190 degrees Celsius. Keep in mind that cinnamon rolls have to be baked at a timid temperature.

Unlike other bread items, you can’t bake it in high heat. Also, keep a 2-3 inches gap between each piece of rolls or they might stick. Bake the rolls for 18-20 minutes.

Rotate the baking tray or pan halfway through the baking time. It’s to make sure that all pieces are baked evenly. If the color starts to reach golden brown then take it out of the oven.

Checking up on the color is important. Whether it’s the color of a brisket or cinnamon roll. Now, it might take a few minutes longer. But not more than 30 minutes.

There should be plenty of baking time for cinnamon rolls. You can check with a toothpick for assurance. Also, check the bottom 1-2 times while baking to see if it’s burning.

If you see it burning too fast then lower the heat. Overheating the oven will also result in burning the cinnamon rolls.

Tip-4: Use A Baking Stone

Using baking stones is pretty popular these days. They are convenient to use as they help with distributing the heat evenly. Especially to prevent the bread from burning at the bottom.

You can place the rolls directly on the baking stone. You can also place a pan or a tray on the stone. For placing the baking stone choose a lower shelf in the oven. The lower third of the oven shelf would be the right choice.

But don’t place it on the bottom shelf. It’s important to keep a gap between the baking stone and the lower element. Otherwise, the cinnamon rolls might burn from the bottom.

How To Fix Burned Cinnamon Roll?

There isn’t much option left at one’s hand when you burn the cinnamon roll. Let’s say you overcooked a little then there’s still hope for you. But there is gonna be a little change in plans here.

We are going to modify the recipe a bit. This new recipe is called the overnight burnt cinnamon roll. It is the same cinnamon roll but a little more on the crispier side.

What you have to do is bake the rolls for 4-5 minutes more. Wait until the color changes from light brown to dark brown. Do not overcook again. Because the inner side should be soft.

Before applying buttercream let it cool. Also, make sure you’re refrigerating it properly. Unlike pudding that gets watery in fridge, the rolls might get a bit harder. Keeping it out at room temperature for 15-20 minutes it’ll soften up.

Hopefully, all this information comes to help with your baking.

Is it okay to eat undercooked cinnamon rolls?

What size pan to use for baking cinnamon rolls?

For a baking pan, use around 9 inches or a 9×9 inches pan. Make sure to properly line the pan inside with parchment paper. Also, cover the rolls with plastic wrap when it’s left to rise.

Can I leave the cinnamon roll to rise overnight?

Yes, you can. Although it’s not necessary to leave it that long. If you do, cover them with plastic wrap and put them inside the refrigerator. Before baking, keep them out at room temperature level for 1-½ hours.

So now you know how to not burn the bottom of cinnamon rolls. We hope our tips come to your help. Always remember to check the temperature while baking to prevent mistakes.

Enjoying cinnamon rolls with hot coffee or tea is the best. We hope for your baking success.