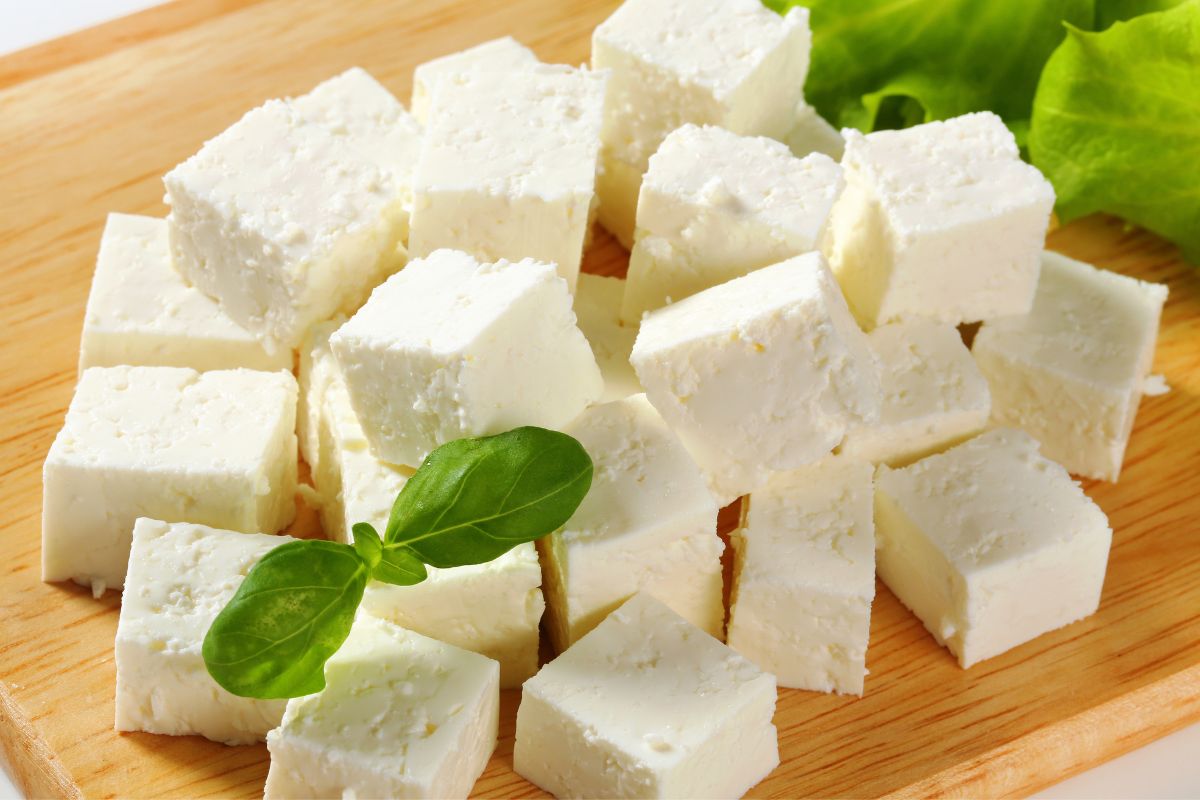 Feta cheese and goat cheese definitely have distinct characteristics, but they also share a lot of similarities, especially when compared to most other cheeses.

Firstly, they both have quite a similar texture. Neither hard nor soft, they inhabit that rather odd space between the two cheesy extremes.

They also react similarly when heated, both have a subtle tang, and depending on how they’re served, they can look identical too, so you wouldn’t be the first to wonder if these two cheeses are actually one. The answer? Sometimes… kind of.

Not the definitive response to your inquiry you were looking for, I know, but it’s a more complicated topic than you may think, and here’s why.

How Is Feta Cheese Made?

Traditional feta is always made using sheep’s milk, but I guess “sheep cheese” doesn’t have the same kind of ring as goat cheese, so it got its own special name (although consider this my official petition to change the name of this cheese to “sheese”).

However, sheep milk feta is often supplemented with alternative milk such as cow and – you’ve guessed it – goat milk, but due to the unique preparation process of feta cheese, there will always be a difference between feta made with goat cheese and cheese sold as goat cheese.

When Is Feta Made Using Pure Sheep Milk?

It’s not actually a matter of when feta is made using pure sheep milk, but where — It all comes down to the nation the cheese is produced in.

The French have gifted us a number of delicious cheeses, and feta isn’t necessarily the first one to come to mind (if it comes to mind at all), but they are one of the three big names in feta production, and they take it very seriously too!

In France, they only use pure sheep milk to make their feta, and it’s the creamiest of the lot, so if you like a nice, rich cheese, the French variant is absolutely the one for you.

Bulgaria is yet another nation that’s not particularly famous for feta, yet they have their own signature take on this ancient cheese, and when I say ancient, I really mean ancient — We’re talking 3000 years!

I digress… Bulgarian feta is fantastic, and much like the French, they refuse to sully their product by mixing the milk from two different animals, but thanks to their own unique approach to making feta, it’s very much its own thing.

While still very creamy, the standout feature of Bulgarian feta is the subtle saltiness.

If you’d opt for tons of flavor over creaminess, you’ll prefer Bulgarian to French feta.

We associate feta cheese with Greece and Greek cuisine, and this nation does produce what’s considered “real” feta, but although this cheese is more embedded in Grecian history and culture than it is in that of France or Bulgaria, they care not for the purity of their product.

Traditional feta made in Greece is most often made with both sheep and goat milk. It’s creamier than Bulgarian cheese but not as creamy as French cheese, and it’s saltier than French feta but not as salty as Bulgarian feta. It exists in the Goldilocks zone between the two.

How Much Goat Cheese Can Be In Feta?

They may be fairly lenient on the milky makeup of their signature cheese, but the Greeks do have one golden rule… No more than 30% of the milk used to make feta cheese can be from a goat, otherwise, it cannot technically be referred to as feta.

If the goat milk does make up more than 30% of the total milk used, it won’t necessarily be sold as goat cheese either, but the feta label is strictly off the table.

Sometimes, feta made outside the EU will also be made with cow milk, as the same rules that European countries apply to their feta production do not apply in other continents.

How Does Feta And Goat Cheese Differ?

Although there is some overlap between the textures of feta and goat cheese, there is a subtle difference. Both are insanely creamy, but feta is super smooth, and goat cheese is deliciously crumbly.

Goat cheese is also quite a bit saltier than feta, but that doesn’t stop people putting tons of both these cheeses on their salads, and by “people”, I mean me.

From a nutritional standpoint, goat cheese contains more saturated fats and sodium than feta, so the latter is probably a better choice for your lean meals, but both are insanely scrumptious.

That said, the differences between these two cheeses go beyond the eating experience. Generally speaking, feta cheese is far more abundant than goat cheese, and as a result, can typically be purchased at a much lower price.

Are Any Other Cheeses Made Using Sheep Milk?

We all just take it as a given that cheese comes from milk and milk comes from cows, but there is plenty of fantastic cheese derived from sheep milk, the most popular of which are…

So, is feta cheese from a goat?

The majority of the time, no. It’s actually the product of curdled sheep milk, but “real” Grecian feta will include as much as 30% goat milk, which is how they manage to make it creamy and salty in equal measure.

Other nations renowned for the production of feta don’t feel quite the same way, opting to use sheep milk exclusively, but ultimately, flavor quality is subjective, so which of these forms of feta should be crowned the cheesy champ comes entirely down to your discretion.