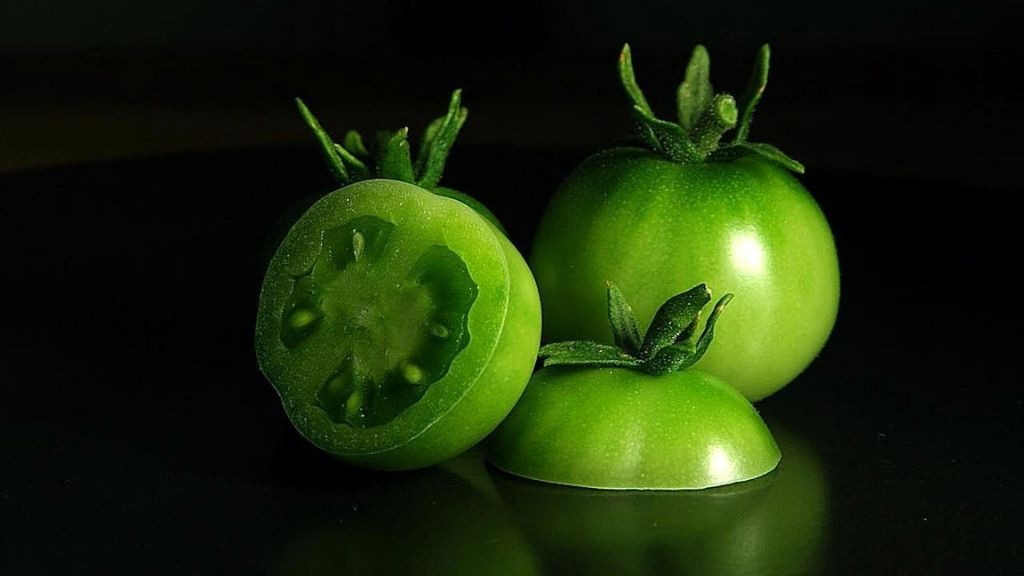 Green tomatoes are an underrated type of tomatoes. These tangy flavored tomatoes can be used to spice up your sauces and curries.

Widely available by the end of Summer and early Autumn, green tomatoes belong to the southern cuisine.

Eat them raw, bake or fry them or tantalize your taste buds by making chutneys out of them! Green tomatoes are totally worth giving a try if you already have not.

To know more about green tomatoes, their usage, easy-peasy recipes, and a lot more, let’s dive in!

What are Green Tomatoes

Green tomatoes are not just unripened tomatoes. Or are they? The debate is still on.

All we know is all tomatoes start as green tomatoes, but the ones we are talking about here stay green even when fully ripened.

These tomatoes are less acidic as compared to red tomatoes and are used to add flavor to salads, salsa or can be eaten on their own.

Some varieties of green tomatoes include German Greens and Green Zebras etc.

Due to their crisp flavor, green tomatoes are versatile and can be used to step up a variety of dishes.

All this talking might have made you crave some green tomatoes. Although they are easily available and you can use them in a variety of recipes, what if you don’t find any near you and a recipe demands them?

Don’t worry because we have this sorted out! Just take a look at the following equally amazing substitutes for green tomatoes that you can find easily in your kitchen.

If you don’t have green tomatoes in store or if you can’t find some in the nearby market, you can always use one of the following as a substitute in your dishes.

You can substitute ripe tomatoes in your dishes instead of green tomatoes.

The two are quite different in texture and taste, but if you are out of green tomatoes and are stuck with a recipe, ripe tomatoes may do the work for you.

When and Where to Find them?

As soon as the season starts, all types and varieties of red tomatoes hit the market.

Red tomatoes are generally available from the mid of July till the start of October, until the frost hits.

To differentiate between the texture and taste of red and green tomatoes, the table below might help you get a quick sneak peek:

Although red tomatoes might not be as rich in the same vitamins and minerals as ripe green tomatoes, they have more dietary fibers and water content in comparison to green tomatoes.

Where can I use them?

As green tomatoes are more acidic as compared to red ones, you can substitute green tomatoes with red ones for people who are sensitive to acidic food.

Where and When to find them?

They are also known as husk tomatoes, owing to the husk that wraps them. Native to Mexico, these fruits are now widely available in the USA and other parts of the world due to their disease resistance.

Although tomatillos are available pretty much all around the season, their peak time stays from early Summer till the end of Fall.

Due to the outer husk, tomatillos are rough and hard in texture. However, before using these, you have to remove the husk.

The husk can easily be removed by hand. Wash the tomatillos to get rid of the sticky layer underneath, and you’re good to go.

The inside of these tomatillos is softer than green tomatoes as they have a higher water content in comparison to that of green tomatoes.

How do they taste?

Tomatillos are a bit sour in taste. They are more acidic than green tomatoes, which tend to be on the sweeter side.

Where can I use them?

The savory flavor of tomatillos makes them a good substitute for green tomatoes. If you are up for a chutney or salsa dip, tomatillos will save the day for you.

Zucchinis and green tomatoes are quite alike when it comes to texture and taste. They have a similar color and crunch as it is with green tomatoes.

Just like green tomatoes, Zucchini is also a fruit that is often harvested young. The fruit is full of nutrients and high in fiber.

When to find Zucchini?

The prime time for finding zucchinis is the peak Summers. They are readily available from June till the end of August.

How does Zucchini taste?

Zucchinis have a mild sweet taste. They can be sauteed for a savory touch or pureed to enhance the sweet notes.

Where can I use Zucchini?

If you were in the mood to fry some green tomatoes for a quick snack, Zucchinis are the right choice of substitute for you.

Bell peppers sound weird, no? We know that. But, you can safely use bell peppers to give a similar texture in soups.

Where and When to Find them?

Central and South America are home to these crunchy, round peppers. However, China leads in the production and distribution of these peppers to your nearby grocery stores.

You can find them in the supermarket or roadside vegetable stalls from Mid Summers till the start of Autumn in September.

Bell peppers are mild and sweet in taste with a subtle bitterness. They are crunchy in texture. They are rich in Vitamin A, C, and a variety of minerals.

Where can I use Bell peppers?

However, due to the bitter flavor, it is better not to add them in dips or sauces.

If you haven’t already added green tomatoes to your table, now is the time to step up your menu.

Here are some of our favorite recipes for green tomatoes that you can try anytime.

This native recipe is the basic, easiest recipe for green tomatoes. It is ready to eat in 17-20 minutes only.

All you need are some:

You can use it as a quick snack or a tasty side dish.

Enjoy your tortilla chips or Doritos with this spicy, mouthwatering salsa verde.

For this recipe, you need:

Serve it right away or freeze it for later use. This recipe is sure to win hearts.

The answer is both yes and no. All tomatoes are green when unripened. However, some trees stay green upon ripening.

Often unripened tomatoes are confused as the only green tomatoes. However, the two are different, and each has its own characteristics.

Unripened green tomatoes can be obtained by picking tomatoes before they are ripe. Sometimes, these tomatoes delay ripening until the season is over and are therefore used as it is.

These tomatoes are different than the actual green tomatoes in the following ways:

How are tomatillos different from green tomatoes?

Tomatillos and tomatoes both belong to the same family. Tomatillos are sour and have a tough, hairy husk covering.

They are different yet closely related to tomatoes and are a good substitute for green tomatoes.

Are green tomatoes injurious to health?

Green tomatoes are completely safe to consume. However, some people might be allergic to tomatoes in general.

In fact, Green tomatoes can be used to reap a variety of health benefits. These tomatoes are not only a good source of vitamins A and C, but they also contain iron, magnesium, potassium, and calcium.

They are also a good source of dietary fiber and minerals.

How do you know when a green tomato is ready to eat?

You can check if your green tomatoes are ready to eat by pressing the bottom of the tomato.

If it has grown soft, the fruit is ready to be consumed. Waiting for the whole tomato to go soft may result in over-ripening.

Can I store my green tomatoes for future use?

You can store your green tomatoes in a cool and dry place. However, it might not be a good idea to store tomatoes (whether ripened or unripened) in a refrigerator.

Why should green tomatoes not be refrigerated?

It is better not to refrigerate your tomatoes, as refrigerating them can slow down an enzymatic action that is responsible for building up the flavor.

What should I do if I’ve already refrigerated tomatoes?

If you have refrigerated tomatoes, put them out for 2 to 3 days at normal room temperature before consuming them.

Interesting further reading: – What is the orange stuff when cleaning shrimp? Are they Edible

If you’ve harvested green tomatoes this year or are just intrigued by the stall of green tomatoes in the nearby supermarket, we hope you get the answers to all your questions here.

The sweet yet tangy taste, crunchy texture, and some amazing recipes will help you add a new flavor to your tables.

So just sit back, relax and enjoy your green tomatoes, for we have got you. Happy Eating!