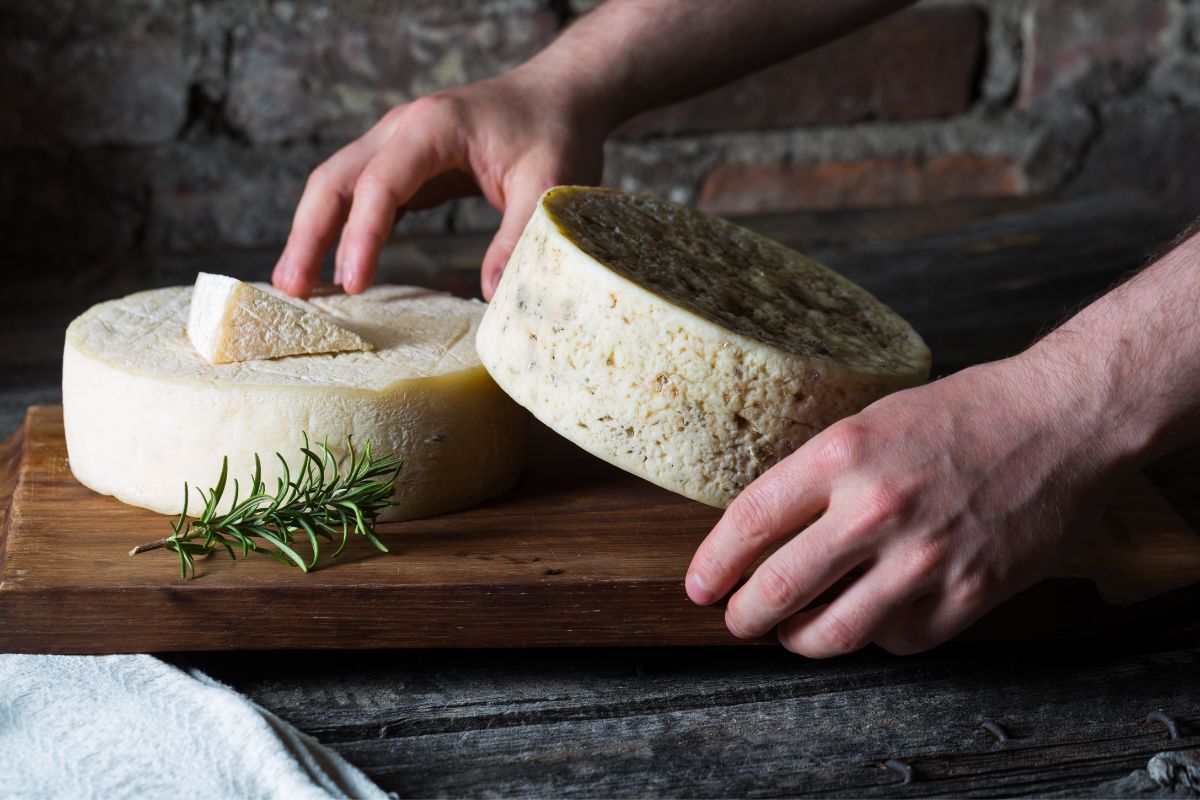 Goat cheese has to be my favorite of all the cheeses — From the texture to the flavor, from its versatility to its variety, it gets top marks from me!

And judging by its popularity around the globe, I’m willing to bet I’m not the only one with a soft spot for this soft cheese.

That said, for whatever reason, it’s not as abundant as many other cheeses, meaning there’s a good chance you’ve gone your whole life without ever having tasted this delectable treat… you poor soul.

Or perhaps you’ve had a chance to partake of the cheesy glory but turned it down for fear of the texture or flavor being too out there.

Well, I’m here to break it down for you in this here guide. When we’re through, I can guarantee that you and I both will have a powerful hankering for this, the king of cheeses. Let’s begin!

The first thing you need to know about goat cheese is that it’s not a singular cheese, but an umbrella term given to a number of different variants, each of which has its own character and flavor profile.

So, I’ll kick us off here with a very general description of goat cheese and its flavor before running through each individual subcategory.

Goat cheese is an incredibly rich, salty cheese that pairs well with a vast array of different cuisines. But when I say “salty” I don’t mean that one taste will shrivel your tongue. You won’t necessarily register any abundance of salt, just a wonderfully potent flavor.

Typically speaking, it has a creamy, buttery flavor with a lovely tartness on the back end.

Texture-wise, I’d class it as a crumbly rather than smooth cheese, giving it a mouthfeel like nothing else.

Some might also detect a subtle earthiness to goat cheese, which is partly why it works so well with natural, muted foods like salad leaves and vegetables.

Young goat cheese is so called because it’s only aged for a short duration before it hits the shelves of our local grocery stores or cheesemongers.

As you might expect, this puts a leash on the flavor, keeping it nice and mild whilst maintaining a hint of that signature goat cheese tang.

This fresh variant is also the softest and most spreadable, yet it will still have a faint crumbliness on the tongue that makes it a far more active ingredient than, say, a cheddar or a brie.

It has a rind, but it will be incredibly soft and pure white, whereas older variants show increasing amounts of “bloom”.

I’d recommend young goat cheese to those tasting it for the very first time, as it’s not as much of a shock to the pallet, easing you gently into the rich, creamy world of alternative cheese.

As the mildest of the lot, it pairs well with accent flavors from herbs, but keeping it plain opens up far more possibilities when it comes to incorporating it into a meal.

Soft ripened goat cheese is aged for much longer than its young counterpart. The average maturing process plays out over a three-week period, but, technically, anything that doesn’t fall into the young category will fall into the soft ripened category.

So, what difference does this extra time make? Well, to me, the most noticeable change is the ferocity of the tartness. A longer aging process allows the cheese to ripen, adding an almost citric element to the kick.

While it’s still very creamy, soft ripened goat cheese has a more nuanced and altogether stronger flavor profile. It may also have a nutty undertone at this stage, with a rind starting to show the first signs of maturity.

That said, you may not be able to see the bloom, as the rind will often be dusted with charcoal to keep it from spoiling until it reaches our plates.

I’d recommend toasting a hearty slice of soft ripened goat cheese, placing it dead center of a white wine risotto, and finishing with a generous sprinkle of toasted pine nuts and an elegant drizzle of balsamic glaze.

When a goat cheese reaches month three of the aging process, it’s considered fully mature. Firming over time, aged goat cheese can no longer really be considered a soft cheese, rather, we refer to it as a semi-hard cheese.

The rind is thickened, locking in the ripe cheese that now celebrates an enhanced earthiness and even stronger citrusy kick, with the nuttiness stepping into the foreground.

Intriguingly firm and even more crumbly in texture, it’s a delicious accompaniment to a rich Merlot.

You’re now officially a goat cheese savant, but you can’t claim your cap and gown until you know how to implement this cheese when preparing some tasty food.

So, to get the creative juices (and saliva) flowing, let’s take a look at some dynamite meal ideas for goat cheese…

As mentioned a moment ago, there’s really no substitute for a robust Merlot with some aged goat cheese, but for young goat cheese, you can’t go wrong with a Malbec, or if there are herbs involved, perhaps a Vermentino.

If you’re more of a white drinker, consider a crisp Sauvignon Blanc or another citrusy wine such as Bacchus or Cotes de Gascogne — The trick is to lean into the tartness of the cheese when selecting a white wine.

And don’t think I’ve forgotten about you, rosé drinkers. For lovers of this pink wine, I’d suggest something very crisp and summery like a Provençal rosé.

Well, you may never have tasted goat cheese with your tongue, but after reading this post, you’ve most definitely tasted it with your mind, which should be all the inspiration you need to grab yourself some of this wonderful cheese and eat it for real!