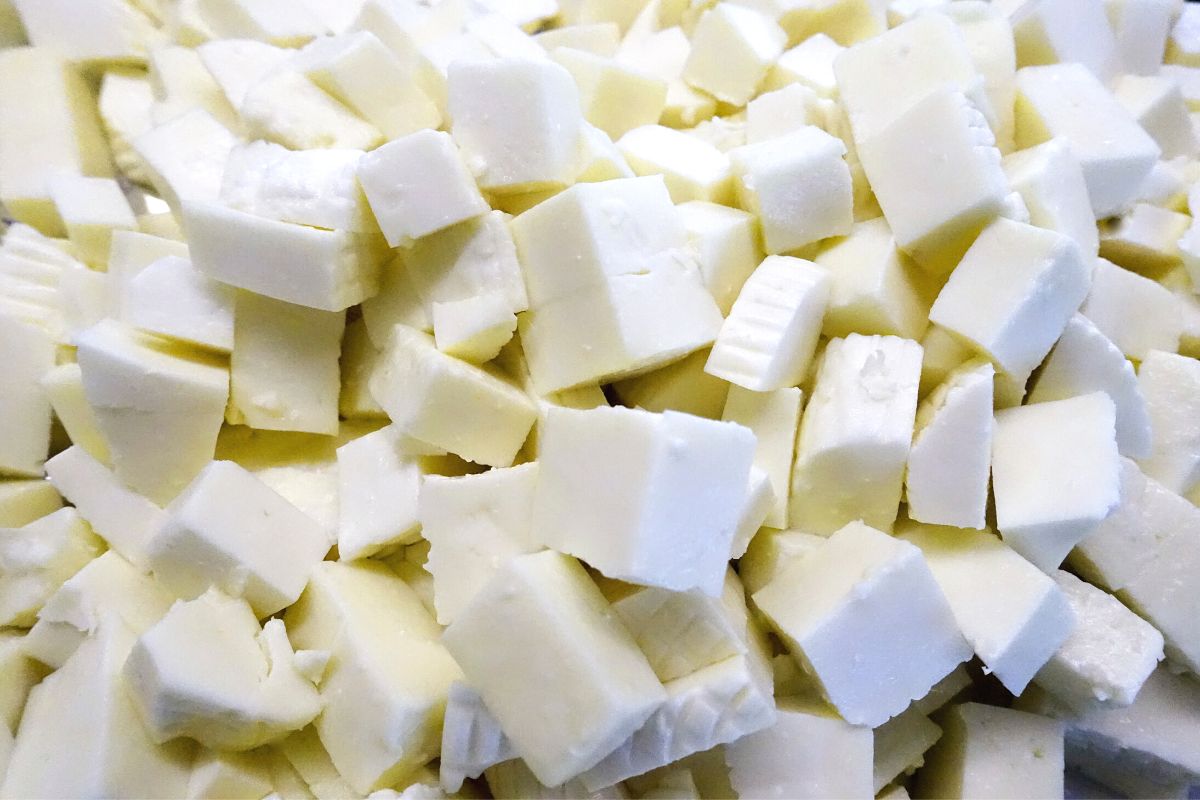 Chipotle is one of the most popular fast food chains in the United States, with their delicious menu of Mexican foods such as tacos, Mission burritos, and bowls.

Cheese is a key ingredient in lots of their dishes, but what kind of cheese does Chipotle use?

The short answer is that Chipotle uses a mixture of White Cheddar cheese and Monterey Jack. When it comes to their famous cheesy dip “Queso Blanco” (which is the Spanish for “white cheese”), it contains multiple types of cheese and a variety of other ingredients.

However, there is so much more to learn about what kind of cheese Chipotle uses, and we’ve got all the answers below!

In the guide below, you’ll learn more about Chipotle’s use of cheese, what their chosen types are like, and what cheeses they use for some of their most popular Mexican meals. Read on!

What Kind Of Cheese Does Chipotle Use?

When it comes to Chipotle, cheese is one of the most important ingredients in their food. As a result, they make sure that they use the best tasting cheeses to really give their dishes and dips the kick they need.

Both of these have their own textures and tastes, but are actually quite similar to one another, which makes them a perfect combination for Chipotle to use together.

They use the blend of these two cheeses, along with a variety of other natural ingredients, in their popular Queso Blanco dip.

It’s taken a few different versions for Chipotle to get it to the quality it has today, but Chipotle’s current Queso Blanco cheese dip has a great taste and texture.

It’s a very smooth and supple sauce and uses just 13 ingredients, with 2 of those being the White Cheddar and the Monterey Jack. Better yet, it doesn’t include additives!

The Chipotle Queso Blanco has a mild and buttery cheesiness to it, with the mix of 2 different cheeses not overwhelming the dip, rather working with all the other ingredients to give you a very balanced treat.

The cheeses are high in fat and moisture, which makes them especially good at melting, though they can be shredded or cut too.

As for the other ingredients in Chipotle’s Queso Blanco, key ones are onion and garlic, which give it a terrific (and addictive!) kick.

Speaking of kick, the dip also has a variety of different peppers in it, which help to make it very warm but not too spicy. These peppers are serranos, poblanos, and (fittingly) chipotle.

How Does Chipotle Make Their Cheese?

In order to make their great Queso Blanco cheese dip, Chipotle brings in both White Cheddar cheese and Monterey Jack onto their sites.

However, they make sure that both types of cheese have been shredded before they arrive, so that they don’t have to shred them on-site and risk the chance of contamination.

Once they have the two different cheeses at their Chipotle site, they mix them together, as well as add the other ingredients (like garlic and peppers) for their Queso Blanco.

However, it isn’t just a question of throwing them all together, because Chipotle uses a tried and tested ratio for mixing the two cheeses.

What Is White Cheddar Cheese?

Now that we’ve looked at Chipotle’s use of both White Cheddar and Monterey Jack cheese, it’s worth looking at what each of these cheeses is actually like.

Most people will know cheddar cheese to be orange, but this is actually only because it has been dyed!

That’s right, there is no such thing as naturally orange cheddar, because cheesemakers have specially been dyeing cheddar orange for years.

As a result, White Cheddar cheese is simply the typical cheddar cheese that you’re used to, only it hasn’t been dyed orange with a natural vegetable dye. White is its natural color.

This also means that there is no difference in the texture or the taste of the cheese – it’s got the sharp and semi-earthy flavor that you know from regular cheddar cheese.

When aged, it’s a bit nuttier and more crumbly.

What Is Monterey Jack Cheese?

On the other hand, Monterey Jack cheese has a texture that is notably supple and compact. The cheese has a pale-yellow color to it, which is quite different from the whiteness of White Cheddar.

As for the flavor, you’ll find that Monterey Jack cheese has a mild and buttery taste. However, there are many different types of Monterey jack available.

One of the most popular is White Pepper Jack, which gives the cheeses a spicy edge that some might love.

This type seems pretty fitting for the Mexican cuisine of Chipotle, though it isn’t the type that they use in their Queso Blanco.

The reason that Chipotle decided to mix White Cheddar and Monterey Jack of all cheese is that they go well together, being relatively similar. However, that isn’t to say they don’t have some key differences.

For one, their rate of firmness is different. Monterey Jack is a cheese that’s semi-hard, with only some firmness to it. White Cheddar, on the other hand, is an undeniably hard cheese, being firmer than Monterey Jack.

Secondly, the two have slightly different tastes and textures. White Cheese has a much sharper flavor to it, being very rich and having a butteriness to it.

What Cheese Does Chipotle Use In Popular Dishes?

The mix of White Cheddar and Monterey Jack cheese is one that Chipotle uses in some of their most popular dishes. For example, it’s used in their bowls and burritos. However, their quesadilla only uses Monterey Jack.

On the whole, Chipotle uses a mix of White Cheddar and Monterey Jack cheese.