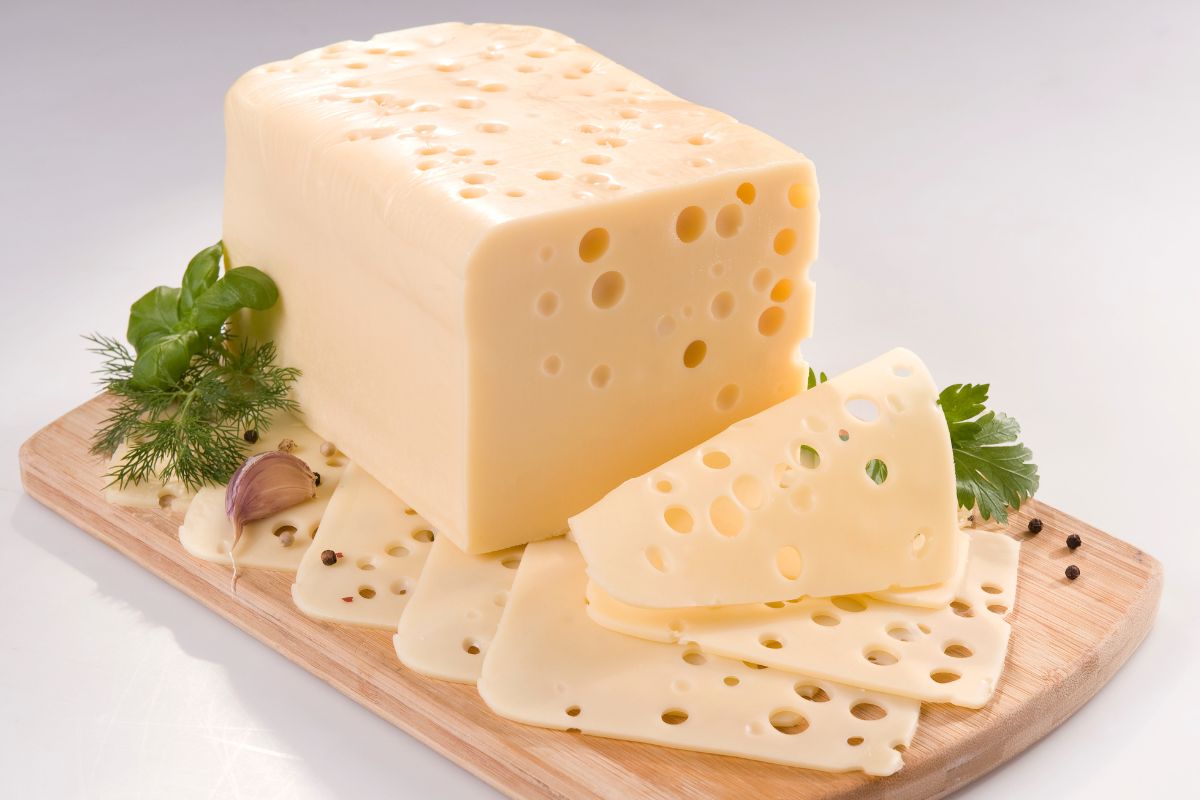 Thanks to those signature holes, Swiss cheese is perhaps the most recognizable of all the cheeses, and it’s darn right delicious too!

But if you’re anything like me, you can’t just sit down and enjoy your tasty yellow snack without wondering where the heck these holes come from.

Could it be possible that it’s someone’s job to cut holes in all the Swiss cheese in the world before it hits the shelves of our grocery stores?

Perhaps there’s such a thing as a cheese worm that takes care of this bizarre business, or maybe these holes are the product of an intensive quality check tasting process before the cheese is released.

The actual answer to the mysterious missing circles in Swiss cheese is a lot less silly and a lot more scientific. Interest piqued? Fantastic! Read on to learn all about the origin of the holes in Swiss cheese.

The Reason Swiss Cheese Is Riddled With Holes

Unfortunately, there is no professional cheese puncher, nor is there such a thing as a cheese worm, and sadly for the employees of cheese factories that produce it, they don’t get to taste test loads of their product before it hits the shelves.

In actual fact, the holes in Swiss cheese are simply a byproduct of the production process.

Known as “eyes” in the biz, these holes are made by a bacterial culture, Propionibacterium freudenreichii subspecies shermanii (try saying that three times fast after a couple of cold ones), or if you’re looking to save a little time, P. shermanii or simply Props.

Propionibacteria occur naturally in things like soil, hay, and grass, so, unsurprisingly, they have no problems finding their way into cow’s milk.

But wait, if it’s a naturally occurring bacteria in cow’s milk, why is it that only Swiss cheese (and a few others) has holes?

Well, because almost all the milk used to make cheese is pasteurized, a process that kills off Props along with a bunch of its bacterial cousins.

If Swiss cheese is made using pasteurized milk, where do the Props come from? The answer? Those crafty Swiss add them in separately!

Yep, all the necessary Props for making Swiss cheese are initially present in cow’s milk, are removed via pasteurization, then the cheesemakers find more and throw it in to replace the Props that were lost.

Why Bother Putting The Propionibacteria Back Into Swiss Cheese?

The next mystery to chew on here is why cheesemakers go to so much effort to return Props to their product. Holes for holes’ sake? Or something a little more substantive than cheesy cosmetics?

As you’d expect, it’s the latter that’s true. Not only do Props munch ho… sorry, eyes into Swiss cheese, but they’re also responsible for that nutty undertone that this cheese is loved for the world over.

How Does Propionibacterium Freudenreichii Subspecies Shermanii Produce The “Eyes” In Swiss Cheese?

The first thing to know about the eye production process is that Swiss cheese is traditionally stored in 70 °F rooms, so it’s incredibly malleable, not altogether melted, but definitely pliable.

And what happens when gas builds up in a solid?

Pressure builds, and if there’s no way for the gas to escape, it’ll keep building and building until it’s capable of blasting its own escape route out into the air.

Being that Swiss cheese is kept in what might as well be a sauna, it’s not hard for Props to produce enough carbon dioxide to blow a bubble that eventually bursts.

Shortly thereafter, the cheese is cooled to 40 °F solidifying all these structural artifacts, ensuring the eyes remain in the cheese until it reaches our mouth.

How Long Does It Take For The Eyes To Form In Swiss Cheese?

You’re looking at about four weeks in that 70 °F room before the correct number of eyes have appeared.

Combine that with the 4-month preparation process before the eye-opening process begins, as well as a 2-month maturing process after the fact, it takes 8 months to get even a single block of Swiss cheese out into the market.

Is Swiss Cheese The Only Cheese With Holes?

Although Swiss cheese typically has the largest and most defined holes, it’s not the only type of cheese with eyes.

Gruyère has to have holes according to French agricultural law, although, ironically, Swiss Gruyère never has holes.

Fontina, an Italian cheese, also has eyes, as it’s made with unpasteurized milk, but they’re quite small when compared to the eyes in Swiss cheese.

Gouda is The Netherlands’ contribution to the pantheon of holy cheese. They won’t always add gas-producing cultures to it, but when they do, you’ll see a few stray eyes in a slice here and there.

Right here in the States, we produce a cheese known as baby Swiss, which is essentially our own take on Swiss cheese, but we put less of an emphasis on cultures, amounting to a cheese similar in taste but with smaller eyes.

However, while there are a few other cheeses that wind up with some eyes here and there, for the most part, cheesemakers try their hardest to reduce gas bubbles in their product, especially for hard cheeses.

Lacking the malleability of softer cheese, gasses are unable to form those aesthetically pleasing bubbles in hard cheese, instead forming a series of unappetizing cracks.

There you have it — The holes in Swiss cheese are the result of carbon dioxide bubbles produced by a bacterium known as Propionibacterium freudenreichii subspecies shermanii, a microorganism that’s also responsible for the nutty flavor of this delicious cheese.